Bitcoincasino.io Casino opened in 2019. The casino is licensed in Curacao.

Slots from all the major software companies and many smaller manufacturers can be found in the casino. We can play with a total of 33 provider games in this online casino, which also shows that the casino strives to serve all the needs of the gaming audience. In addition to games from Netent, Betsoft, Pragmatic and many major manufacturers, you can also find games from Playreels, Leapgaming, and other smaller providers.

The interface is very transparent, easy to navigate in this online casino. The casino is available in 10 languages, but due to the simple softswiss platform, those whose native language is not available can also handle it.
The currencies that can be used in the casino are EUR, USD, CAD, JPN, CNY and other traditional currencies, and as the name suggests we have a number of cryptocurrencies available: Bitcoin, Bitcoin Cash, Ethereum, Litecoin Dogecoin and Tether

The atmosphere of the casino is determined by the fact that we can choose the most suitable game figure for us according to our bonus needs.

Payouts are made within 5 minutes, so you can see that this bitcoin casino takes players ’expectations seriously. 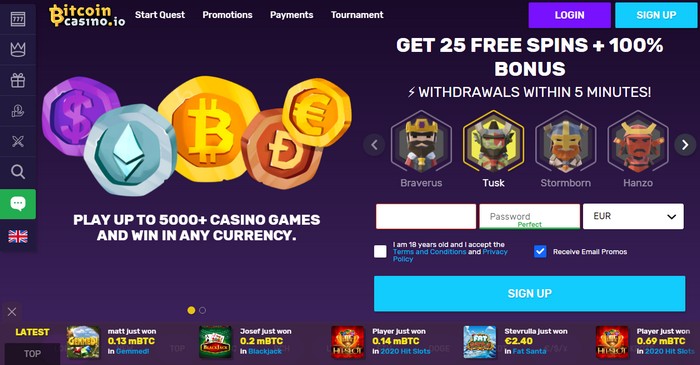 Details of the promotions

At bitcoincasino.io, so-called kingdom tournaments are held every week, in which each player automatically participates with their bets. The main prize is 0.1 BTC, which equates to about $ 800.

There is also a loyalty point system in the casino where you get loyalty points for every bet you make. These points can be redeemed for real money later, and you can also reach levels that result in a freespin or weekly cashback.

A very popular game in the casino is a game called Pragmatic Play Wolf gold, which is a 5-reel slot machine. The game has a money respin, stacked wilds and blazing reels feature, which if you are lucky can result in serious winnings - depending on our stakes, of course. The respin function is not fixed, meaning that if a number stops on the board, the number of free spins remaining will not decrease. This slot machine has a 96% RTP index and is very easy to learn to use. If you want to get acquainted with the game for the first time - before playing it live - we have the demo function for the game. The same can be said for other games in the casino.

Another popular game in bitcoincasino is Amatic Industries ’2015 game, Admiral Nelson. This is a 3-line, 5-reel slot game that includes 10 paylines. The game has an RTP index of 97% and is considered to have a medium to low volatility. When we tried the game a bit we had the feeling that we were winning too many times. It’s not like this is such a problem, but we need to be prepared that we’ll have some winnings every 2-3 spins. Let’s take a brief historical overview to understand the symbols of the game The game, as its name suggests, was inspired by Admiral Nelson, a former lieutenant general of the British Royal Navy, whose name became known during the Napoleonic Wars. Horatio Nelson was born in 1758 and enlisted in the British Royal Navy at the age of 12. Initially, he served on a frigate commanded by his maternal uncle, who promoted him to sailor cadet and then sent him for officer training. In 1775, his uncle was appointed naval superintendent so he could help his nephew move forward. In 1777, Nelson fought as a lieutenant in the West Indies. He was promoted to captain in 1779 and became commander of a frigate looted by the French. In 1784, he was sent to the district of Antigua to enforce the British Freight Act of 1651 by force, which did not go simply because the Americans and the colonists were outraged that they could no longer trade under the law. Nelson also confiscated 4 U.S. merchant ships in the West Indies, which was later prosecuted. In 1798, with his victory in the Battle of the Nile, he thwarted Napoleon's plans for Egypt, and in 1799 he was tasked with recapturing the Kingdom of Naples. In 1801, England and France concluded a ceasefire, which lasted for a short time, so in 1805 they were already fighting with the combined French and Spanish fleets at Cadiz. In the battle of Trafalgar, which ended in the victory of the English, and at the same time marked the end of Napoleon's reign, he was shot with a bullet.