Euslot Casino opened in 2018. The casino is licensed in Malta. The owner and operator is N1 Interactive Ltd., which also successfully operates a number of other trusted casinos. Slots from all the major software companies and many smaller manufacturers can be found at Euslot Casino. We can play games from more than 25 providers in this online casino, which also shows that the casino strives to serve all the needs of the gaming audience. In addition to games from Netent, Betsoft, Yggdrasil and many other major manufacturers, you can also find games from Push, PGsoft, and other lesser-known game providers. The Euslot casino runs on a softswiss gaming platform, so transparency is also a feature of this casino.

Payments will be made on the same day the payment request is submitted. It usually only takes a few hours to make the payment. 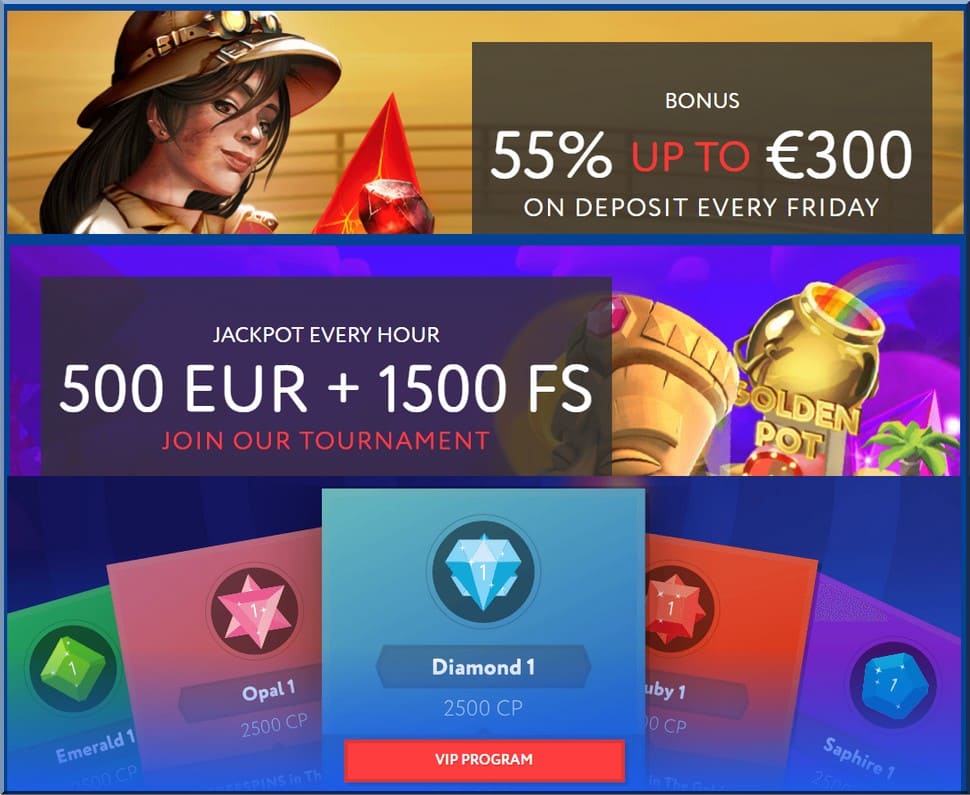 Like other online casinos, there are redemption requirements for bonuses, which are, however, quite fair (40x bonus amount) - the casino does not seek to win the amount paid. You can easily keep track of where you are by rotating your current bonus under the My Account Bonuses menu. The bonus will automatically appear on our account if we request it at the time of deposit, we do not need to do any extra work (such as requesting it from customer service).

The Euslot Casino deposit bonus is 100% up to a maximum of EUR 100. The first, second, and third welcome bonus systems are not used here. In addition to the € 100 bonus, there are 100 free spins that will be awarded every 20 spins per day for 5 days. We need to deposit a minimum of € 20 to get the bonuses.

You can also get a reload bonus at this online casino. Here, this promotion runs as the 55% Friday Deposit Bonus. To redeem this bonus, you must currently use the bonus code EUFRIDAY, but this must be verified before depositing, as it is subject to change at any time. There is also a VIP program at this casino where the levels are named after gems such as emeralds, diamonds, opals, rubies, and sapphires.

Euslot Casino has a so-called "Jackpot Every Hour" promotion in which you can win a cash prize and win free spins.

The Amatic Industries Casanova slot machine has also recently become very popular at Euslot Casino. The game was released in late 2017, but still retains its popularity after 2 years and has not disappeared from the collective public consciousness, unlike several other slot machines that appeared later. The game is an infinitely simple slot machine with 11 paylines, the principle of which can be mastered in seconds. The game features symbols related to romance and Venice, and the wild symbol naturally appears in the image of Casanova. So don’t be surprised if after a while we feel the hustle and bustle of carnival and carnival. The most valuable is the Casanova symbol, followed by the ladies, with fairly equal value for blonde red and brown, or more black hair in graphics. The carnival mask is the bonus that triggers 10 free spins. Symbols also include alcoholic beverages, images associated with Venice, roses, fans, and other romantic symbols that have less value than previously written. The game has js and HTML5 technology and can be played on both tablet and mobile, as well as desktop. Amatic Industries also has a game called Casinova, which is actually a modern-day remake of the story.

Giacomo Casanova was born in 1725 in Venice. His 4,000-page autobiography, published after his death, also features stories of his love conquests, making him a synonym for womanizer and heartbreaker for posterity. At a young age he intended to enter a church career, but already at that time his complications arose, on one occasion e.g. he fell drunk from the pulpit while preaching. He later became involved in inheritance law disputes, for which he was arrested for a short time. He was next arrested at the age of 30 for his various wrongdoing and sent to the famous Venetian lead prison, from which, however, he escaped and left Venice after months of imprisonment. He has told the story of his escape in many high-profile European companies, and he also covers it at length in his autobiographical writing. He turned in several upscale companies, and even in the XIII. He was also honored by Pope Clement. In Prussia, Frederick the Great offered him a job, but he did not succeed with Catherine the Great, nor did Voltaire deal with him, whose friendship he sought. Interestingly, however, his autobiography far exceeds the popularity of Voltaire, who despises him today. He died in the Czech Republic in 1798, and since then he has dealt with his life history in many films and writings.