Golden Star Casino opened its doors in 2012, meaning it is not a freshly opened casino. The casino is licensed in Curacao. Slots from all the major software companies and many smaller manufacturers can be found in the casino. In addition to games from Netent, Betsoft, Yggdrasil and many other major manufacturers, there are also games from Playreels, Leapgaming, and other lesser known software providers.

Currencies available in the casino: Euro "EUR", US Dollar "USD", Australian Dollar "AUD", New Zealand Dollar "NZD", Canadian Dollar "CAD", Norwegian Krone "NOK", Polish Zloty "PLN", Czech Koruna " CZK ", South African Rand" ZAR ", Japanese Yen" JPY ", South Korean Won" KRW ", Kazakhstan Tenge" KZT "and Bitcoin" BTC " As you can see, the casino follows today’s trends and bitcoin can also be found among the deposit options. Of course, you can choose any of the payment methods shown in the table on the left. We will probably choose skrill, neteller, or mastercard payment from ourselves.

The Golden Star casino is not built around any unique theme in terms of design, but that doesn’t come at a disadvantage at all because it makes it perhaps even more transparent than other online casinos.

Payments are made on the same day the payment request is submitted, it usually only takes a few hours. Selfie and other unnecessary things are not required to withdraw money, and this is true for all casinos featured on Slotathome. 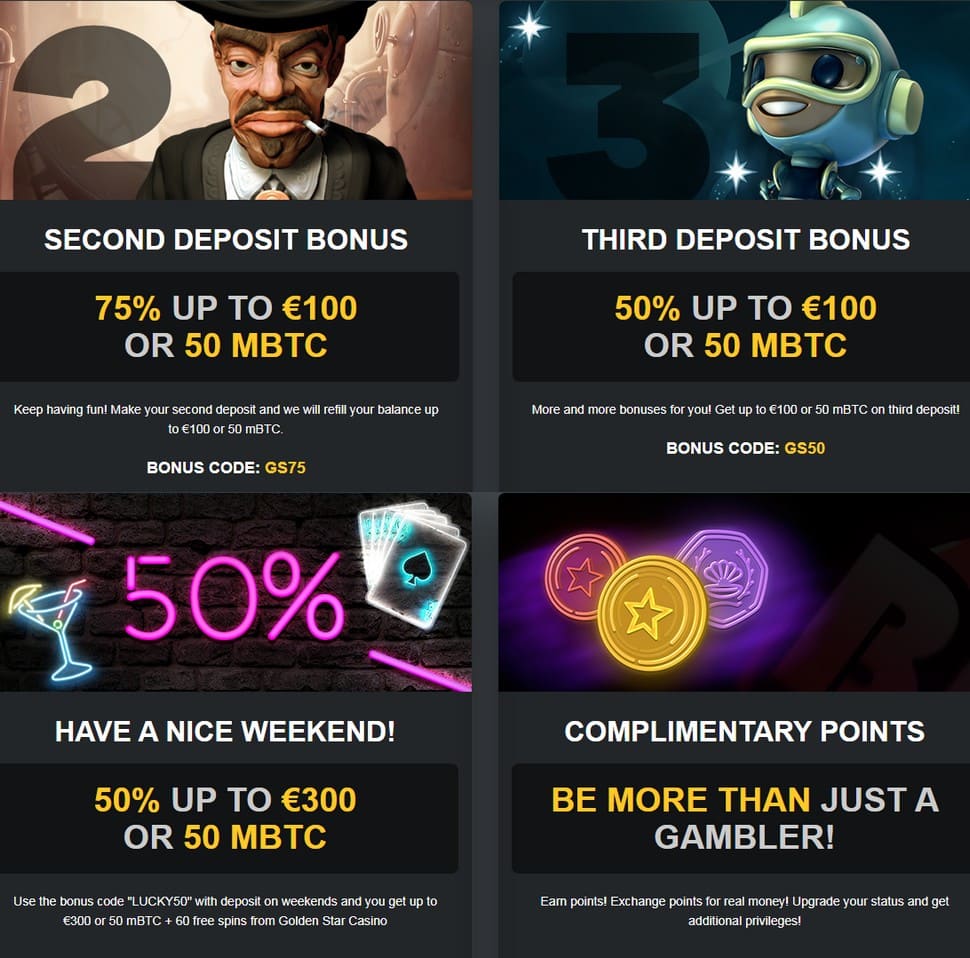 The 100 free spins will be awarded for 5 days in the form of 20 spins per day. There are also up to € 300 and up to € 100 promotional banners "in circulation" for the first deposit bonus. The second is indicative, as shown in the list above. The € 300 bonus applies to the 50% reload bonus, which is one of the best compared to similar promotions at other casinos. For deposit bonuses we can use bonus codes GS100 GS75 and GS50 when making a deposit. The bonus will be credited automatically. Spin requirements are also included here for bonuses, which are set at 40x at Golden Star Casino (40x bonus amount only), which is also quite favorable. I often come across casinos that advertise their deposit bonuses with a 30x requirement and only indicate in the description of the bonus in modest parentheses that the 30 is actually 60 because it also applies to the deposit amount. The reload requirement for the reload bonus is also 40x the bonus amount. If you play with a bonus, your bet can be up to € 1 per round and, like all other casinos, there are game restrictions. You can choose from slot machines from more than 25 providers.

In addition, the casino has a loyalty program with 15 loyalty points (CP) = 1 euro. With our bets we reach higher and higher levels, which allows for a more favorable exchange rate.

You can also find the popular Lottery Ticket promotion at Golden Star Casino.

A very popular game at Golden Star Casino by Netent software maker Slot is Jimi Hendrix. It’s a low-volatility slot machine with an RTP index of 96.9%, so it’s no wonder it soon became a favorite of gamers. Due to low volatility, some online casinos cannot use this slot machine to spin the bonus. It is a slot machine from Netent released in April 2016, but it has lost almost none of its popularity in the last 4 years. Game layout You can expect to win on 5x3 and 20 paylines. Most of the symbols are related to music, record, white electric guitar, red electric guitar, but they also include heart, peace symbol and flower. Features include Purple Haze, inspired by Hendrix's legendary number "Purple Haze". Also featured is Crosstown Traffic and the legendary Little Wing. There is no progressive jackpot in this game, so you can win up to 400 times your bet. This game can be played on both desktop and mobile like any other Netent game. For those who love Jimi Hendrix’s music, or simply want to experience the atmosphere of the ’60s, this game is the perfect choice. Due to the low volatility of the slot machine, we are guaranteed not to be bored. Jimi Hendrix was an American guitarist, composer and singer who is still a cultural icon to this day. He gained world fame at the 1967 Monterey Pop Festival, and in 1969 his performance ended the Woodstock Festival. He died in London in 1970, but legends circulate to this day about the circumstances of his death. Jimi was 27 at the time.

Another popular game at the Golden Star online casino is Endorphina’s Kamchatka slot machine released in late 2018. The game was inspired by Russia’s largest peninsula and its diverse populations of living beings as well as its natural phenomena. The area called the Kamchatka Peninsula is 1250 km. long and covers an area of ​​270,000 square kilometers. In the game, the most famous creatures of the peninsula appear on the reels, such as foxes, wolves, reindeer, eagles, Eurasian salmon, and even brown bears from Kamchatka, which in reality we would not like to get so close to. The wild symbol is also represented by the bear in the game, which appears randomly in a rather scary form. Additional symbols are the usual card symbols, and the scatters show themselves in the form of a volcano, accompanied by a big bang. There are 160 volcanoes on the peninsula, 29 of which are still active today, and 19 are classified as World Heritage Sites. The Valley of the Geysers in the middle of the peninsula is a unique formation in Eurasia. Kamchatka is one of the least populated areas in Russia, with a population of less than 1 person / sq. Km. The largest city is Petropavlovsk, where 40% of the population lives. During the Cold War, the Soviet navy was stationed on the peninsula, declared a military area, where rocket experiments were also conducted that contaminated the area with heavy metals and nuclear materials. Going back to the game: it’s a 5-reel, 3-line slot machine with 243 ways to win. The slot machine can be played on JS, FLASH, HTML5 technology, mobile, tablet and desktop. The RTP index of the game is the usual 96% from Endorphina, there is also a way to adjust the turbo spin, which combined with auto spin speeds up the gameplay quite a bit. The game has a pleasant soft musical background that can even be turned off after a while.

The good news for Endorphina game lovers is that the Golden Star Casino has a total of 64 slot machines for providers. In addition, we have the opportunity to play on the slot machines of many other well-known and lesser-known software providers, and of course we can find the right one for us among the inevitable desktop games. Authentic, Evolution and Luckystreak are represented in the live casino. We can play our favorite games at more than 170 tables: holdem poker, roulette, hi-lo, baccarat oasis poker, blackjack.